Further enhancement of the defense cooperation among Japan, South Korea and the United States 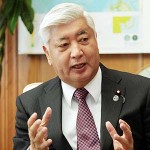 Gen Nakatani, Defense Minister of Japan, expressed his opinions in an exclusive interview with the Sekai Nippo in the office of Defense Minister. He expressed his “strong concern” about improvement of North Korea’s military capability through recent testing of a nuclear bomb and a long-range ballistic missile. He pointed out that North Korea may have come to believe that it achieved strategic deterrence against the United States, and warned that “if it came to have such misguided belief and self-confidence, this will increase possibility of more frequent and serious military provocations on the part of North Korea.” He emphasized the necessity to enhance defense cooperation among Japan, South Korea and the United States.

Q. What is your assessment of the progress of military technology of North Korea demonstrated by recent testing of a nuclear explosion and a long-range ballistic missile which North Korea claimed to be a hydrogen bomb and a satellite respectively?

On the other hand, North Korea successfully test launched a derivative model of Taepodong-2 in December, 2012. My assumption is that they are verifying technologies necessary for longer range and advanced precision of a ballistic missile including those which enable separation of multi-stage rocket and control of attitude and propulsion.

With regard to recent launching of a ballistic missile which they called “satellite,” Ministry of Defense feels that it is necessary to conduct more detailed analysis and verification in many respects. Based on released images and flight pattern, North Korea appears to have launched a long-range missile similar to the derivative model of Taepodong-2. They appear to have placed some kind of object on the orbit around the earth. I have to conclude that they enhanced technological maturity of missile through recent long-range missile launch.

Such technology can be applied to intermediate or long-range missiles North Korea is currently developing including the Musdan which was displayed in a military parade or KNO8. Their recent missile launch advanced their entire missile development program further. Such improvement of their ballistic missile capability and their provocations including their implied threat of missile attack against Japan are of deep concern to Japan in term of our national security.
One thing worrying me is that North Korea may have come to believe that they gained a strategic deterrence against the United States. Such misguided belief or overconfidence may lead to more frequent and serious military provocation on the part of North Korea. Japan continues to regard such actions of North Korea as increasingly threatening.

A. Ministry of Defense and Self-Defense Forces are collecting information and conducting surveillance on a daily-basis to cope with any possibilities including North Korea’s missile launches without warning. On the other hand, based on possible improvement of North Korea’s ballistic missile capability, Japan is planning to comprehensively improve our anti-ballistic missile capability based on the National Defense Program Guidelines. In the anti-ballistic missile system, we plan to strengthen readiness as well as continuous and simultaneous targeting capability to enhance our nation-wide defense capability. From the view point of defending Japanese people’s safety and security, Japan considers all possible contingencies and appropriately respond to them. We want to continue making utmost efforts to protect people’s life and properties from the threat of missiles.

A. THAAD missiles have longer range than PAC3 and are capable of intercepting incoming missiles at early stage of trajectory. We are energetically conducting various studies including investigative research from FY 2014. Although we don’t have a concrete plan to introduce THAAD at this point, we believe that introduction of new assets is one of the ways to concretely strengthen our capability. While researching advanced equipment and measures by the United States, we want to continuously accelerate our review on our future military posture.

Q. What is the deadline to conclude such research?

A. Japan, South Korea and the United States share common interests in peace and stability in this region. It is important in coping with various security challenges including North Korea to plan close coordination at every opportunity. In recent incidents of North Korean nuclear and missile threats, I took an initiative to call South Korean Defense Minister Han Min-koo. I also conducted a telephone discussion with the US Defense Secretary Carter.

The trilateral Defense Minister meeting of Japan, South Korea and the United States was held in Singapore in May last year and we agreed to promote cooperation in national security. It is Ministry of Defense’s desire to conduct trilateral consultations on the regular basis and promote information sharing as well as defense cooperation and joint trainings in non-traditional areas.

A new US-Japan Defense Guideline was formulated in April last year, and it clearly refers to enhanced promotion of trilateral defense cooperation. Based on those, I want to promote security and defense cooperation in broad areas, and enhance deterrence and response capability through the US-Japan alliance.

Q. If Japan and South Korea can directly share information, the crisis-response capabilities of both countries will dramatically increase. What is your prospect of concluding General Security of Military Information Agreement (GSOMIA) with South Korea?

Q. China deployed surface-to-air missiles on the Woody Island which is one of the Paracel Islands. What is your view on this?

A. Ministry of Defense pays a significant attention to the situation of the South China Sea. We are conducting information collection and analysis on a daily basis. We confirmed deployment of equipment considered to be surface-to-air missiles based on publicly-released images of the Woody Island. In recent months, China has been improving a foothold on the Woody Island over which it has territorial disputes with Vietnam and other countries by extending the existing runway on the island. China’s unilateral action to buildup footholds in the South China Sea, utilize them for military purpose, change status que and increase tension is a common concern of the international community. It is important for Japan to collaborate with the international community to preserve open freedom and peaceful ocean.

We will continue to pat attention to China’s activities in the South China Sea. China stated that it has no intention of militarization of the South China Sea, so we are expecting more transparent explanation from China based on its statement.

Q. Chinese vessels have been roaming around the Senkaku Islands and repeatedly invading Japan’s territorial water. How are you going to defend the islands? Do you consider the possibility of establishing moorings, lighthouses or communication facilities for safe navigation to enhance administrative control of the islands?

In order to cope with aggressions on those islands, it is important for Japan to deploy military forces suitable to security environment to secure maritime and air superiority in addition to surveillance activities and strengthen defense posture in the Nansei Islands in tangible ways. Based on such mindset, we are making concrete efforts under the National Defense Program Guideline and the Midterm Defense Buildup Plan.

For example, we deployed E2C (early warning aircraft) units in Naha Base for surveillance two years ago. Also, we organized 9th Aircraft Wing on January 31, and deployed two F15 wings at Naha Base, thereby improving air-defense capability comprehensively. Air Self-Defense Force radar site is located in the Nansei Island area, but ground forces are not deployed on the islands other than the main Okinawa island. Therefore, we are going to station coastal surveillance forces on the Yonakuni Island on March 28, whose mission is to watch out vessels and aircraft passing through the area from the island’s coast and detect various signs at early stage.

With regard to the Amami Oshima, Miyakojima and Ishigakijima Islands, we will try to station policing units, mid-range surface-to-air missile (Chu-SAM) units and SSM (surface-to-ship missile) units on the islands to enable prompt early response to various contingencies including natural disasters.

There is no doubt that the Senkaku Islands are Japan’s own territory in term of history and international laws. Japan actually has an administrative control over the islands. The whole of the Japanese government will consider concrete measures to stably maintain and manage the Senkaku Islands and the ocean around them including moorings from strategic point of view.