Most mourners at a funeral are happy that the occasion isn’t about them, but President Obama wants star billing everywhere he goes, even at the gates of paradise. Speaking Tuesday in Johannesburg at a memorial service for Nelson Mandela, the president imagined that a somber occasion where the eyes of the world were upon him was an appropriate stage for advancing his political agenda at home.

“We know that like South Africa, the United States had to overcome centuries of racial subjugation,” Mr. Obama told assembled thousands and the millions watching on television. “Michelle and I are the beneficiaries of that struggle. But in America and South Africa, and countries around the globe, we cannot allow our progress to cloud the fact that our work is not done.”

Top officials at the Homeland Security Department skirted customary channels in negotiating a special U.S. customs facility at an international airport in the United Arab Emirates, and then some advised on UAE security-related projects after leaving the government, according to congressional and business sources.

Formal plans for a pre-clearance center in Abu Dhabi, one of the seven monarchies that make up the UAE, have sparked congressional concerns about U.S. border security and about the economic impact on the airline industry, where the plan faces opposition from some domestic carriers and airline unions.

After five years of stimulus schemes ranging from federal bailouts and a trillion-dollar stimulus package to the Cash for Clunkers program, Americans have yet to enjoy the “Recovery Summer” that they were once promised. Now, President Obama is promoting food stamps as the next great form of economic stimulus.

The White House last week featured on its website a list of things Americans should “keep in mind” on Thanksgiving. Food stamps (officially known as the Supplemental Nutrition Assistance Program, or SNAP) were at the top of the list. “SNAP is boosting the economy right now,” the administration explained. “SNAP’s effect extends beyond the food on a family’s table – to the grocery stores, truck drivers, warehouses, processing plants and farmers that helped get it there.” While Mr. Obama has occupied the Oval Office, the number of Americans on food stamps has gone up 67.7 percent. Our economy ought to be going gangbusters by now.

The Pentagon has loosened its guidelines on avoiding civilian casualties during drone strikes, modifying instructions from requiring military personnel to “ensure” civilians are not targeted to encouraging service members to “avoid targeting” civilians.

In addition, instructions now tell commanders that collateral damage “must not be excessive” in relation to mission goals, according to Public Intelligence, a nonprofit research group that analyzed the military’s directives on drone strikes.

President Obama’s deal-making skills usually shortchange America. He puts the world at risk by coddling an Iran loving the bomb; he requires Americans to purchase health care they don’t want from a website that doesn’t work. Now the administration is compelling utility companies to pay for a nuclear-waste storage site they can’t use, and never will.

The U.S. Court of Appeals for the District of Columbia last week ordered the Energy Department to stop charging nuclear-power firms $750 million in annual fees to pay for the Yucca Mountain Nuclear Waste Repository in the wilderness of Nevada. Though more than $12 billion has been spent building the site, the administration has decided not to use it, in deference to the senior senator from Las Vegas and his decree of “not in my backyard.” The court said the administration had failed to present a convincing argument for further collection of the fees, and attempting to use “the old razzle-dazzle” obscures the fact that the government has no plan to spend the money.

President Obama completed an ambitious fundraising schedule for Democrats in November, but many of the congressional candidates he is trying to help are finding their election prospects next year imperiled by the president’s faulty health care law.

Several polls in the past week have shown congressional Republicans pulling even or slightly ahead of Democrats in generic balloting for the midterm elections, a swing of at least 10 percentage points in less than a month. Pollsters attribute the seismic shift to the series of glaring flaws in Obamacare, most of which came to the public’s attention after the program’s rollout Oct. 1.

Rules of engagement limit the actions of U.S. troops and drones in Afghanistan アフガンでの米兵・無人機の行動を制限する交戦規程

The rules of engagement place the burden on U.S. air and ground troops to confirm with certainty that a Taliban fighter is armed before they can fire － even if they are 100 percent sure the target is the enemy. In some cases, aerial gunships have been denied permission to fire even though they reported that targets on the move were armed.

With the debris of his health care scheme falling like autumn leaves, President Obama is looking for news, any news, to suggest that his White House is doing something, anything, right. He landed on the most unlikely candidate last week. He’s taking credit for the surge in the production of oil, which exceeded imports for the first time in 18 years.

The Obama administration is funding a joint nuclear security center in Beijing designed to stem nuclear weapons proliferation – despite recent state-run media reports showing Beijing’s plans to hit U.S. cities with nuclear missiles that would kill millions of Americans during a conflict.

A White House official said the Beijing center would not be used to help protect Chinese nuclear weapons. 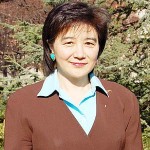 President Obama’s approval rating has sunk to 37 percent in a new poll released Wednesday – the lowest of his presidency – and his disapproval rate is at 57 percent, a new high for him in CBS News polls.

His approval rating has dropped 9 points since October, according to the CBS News poll. 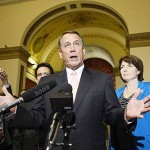 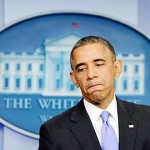 Sometimes thTrouble in Paradisee government can make life better for everyone. This is the socialist dream. Most of the time the government fails, usually miserably, as with President Obama’s miserable attempt to manage the nation’s health care. So far his administration has been unable to manage a website. Socialist dreams always die hard, as the common folk – and the uncommon folk as well – are learning in Venezuela in the wake of the Hugo Chavez experiment in economic fantasy.

Venezuela’s so-called Bolivarian revolution, now presided over by Nicolas Maduro, the hand-picked successor to Mr. Chavez, has set out to maintain “fair” prices on everything in the markets. It’s all to protect the people. Basic goods such as butter and milk have all but disappeared, and when there’s a rumor that a market has a few rolls of toilet paper for sale, the riot police are dispatched to calm the mob. How can you have a paradise without toilet paper? But such is the legacy of the Hugo Chavez revolution.

Back in Iowa, Ryan finds himself at a political crossroads アイオワ州再訪、政治的分岐点のライアン氏

ALTOONA, Iowa － Despite being on the losing 2012 presidential ticket, Rep. Paul Ryan’s White House prospects have not dimmed in Iowa, where Republican insiders say he will get a strong look in the 2016 caucuses if he takes a crack at the nation’s top elected office.

At the same time, some think Mr. Ryan, who has maintained a low profile since the presidential election, is next in line to become speaker of the U.S. House. 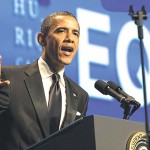 One of the nation’s top intelligence officials defended the National Security Agency’s snooping on online communications at a Capitol Hill hearing Wednesday, telling lawmakers that more transparency is not needed － and would prove self-defeating. Robert Litt, general counsel for the director of national intelligence, warned that sifting through the massive reams of digital communications swept up by the NSA to determine which were sent by Americans and which were not would make any privacy violation even more invasive.

“We believe that the reporting we’ve already agreed to provides the right balance between transparency and national security,” he told the Senate Judiciary Subcommittee on Privacy, Technology and the Law.