The Obama administration has dragged its feet on revoking Obamacare coverage for people who can’t prove U.S. citizenship or legal residency, allowing some of the estimated 11 million illegal immigrants in the U.S. to continue enjoying taxpayer-funded benefits, a Republican senator charged Monday.

“The Obama administration is bending over backwards to give Obamacare to illegal immigrants but won’t protect hardworking American citizens who are losing their health care coverage,” said Sen. David Vitter, Louisiana Republican and an outspoken critic of President Obama’s health care law.

Ronald Reagan’s famous question that sank Jimmy Carter in 1980 – “Are you better off than you were four years ago?” – could be reprised to measure the performance of Barack Obama and the Democrats. The latest figures from the Census Bureau and Federal Reserve suggest the answer would be an emphatic “no.”

In 2008, Mr. Obama’s message of hope and change resonated with the promise of “policies that invest in our middle-class, create new jobs, and grow this economy from the bottom up so that everyone has a chance to succeed.” Audiences cheered, but now with the knowledge from experience, the question becomes, has that investment paid off?

Hillary Clinton at DNC women’s forum: ‘So much at stake’ in this year’s midterms ヒラリー・クリントン氏、民主党女性会議で投票を呼び掛け

Former Secretary of State Hillary Rodham Clinton urged a crowd Friday at the Women’s Leadership Forum to get out the vote this year, saying that the midterm elections are “crucial” and “there is so much at stake.”

“Voters have a choice in November – a choice between those who blocked paycheck fairness, who applauded Hobby Lobby, who tried to stop the renewal of the Violence Against Women Act, or leaders who will fight for women and girls to have opportunities and rights they deserve,” she said at the forum hosted by the Democratic National Committee. “Leaders who will fight for families and for all of us.” 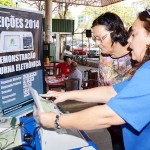 Behind the scenes of the U.S. military preparations for airstrikes in Iraq and Syria against the al Qaeda offshoot terrorist group Islamic State, the CIA is gearing up for new drone strikes and a surge in intelligence-gathering operations to support it, according to U.S. officials.

The agency is beefing up its presence in countries near Syria, including Jordan, as part of increased U.S. military operations in the region, said officials close to the agency. Liaison with regional spy services also is being increased.

While President Obama is focused on getting money to friendly-ish Syrian rebels, Congress is increasingly demanding he take more steps to stop militant fighters from coming to the U.S. by stripping Americans of their passports if they join the fight and by suspending countries that have large contingents of foreign fighters from the Visa Waiver Program. 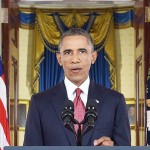 The plates to print money across the world ought to come with a warning label. There’s nothing more addictive to government than the ability to flood the market with paper currency. It seems like a solution, but it’s not. Mario Draghi, the president of the European Central Bank, announced last week a desperate “monetary-easing” policy that will combine with negative interest rates to prop up crumbling economies in the Old World.

The central bank’s asset-buying scheme won’t be any more successful in Europe than the Federal Reserve’s “Operation Twist” has been in the United States. For the past three years, the Fed has been swapping short-term securities for long-term securities in a scheme to drive down long-term interest rates in the hopes that would encourage businesses to borrow and invest.

It’s long been said that the Oval Office changes its occupants in ways only those who have served in the small club of presidents can appreciate.

Nowhere was that more apparent than Wednesday night when Barack Obama, the once youthful politician who just six years ago eschewed American interventionism across the globe, became the fourth graying-haired president in the last quarter century to ask the American people to support a decision for expanded military action in Iraq. 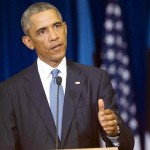 Obama immigration delay means 60,000 to be deported by November 移民改革の延期で11月までに６万人が国外退去に

Nearly 60,000 immigrants will be deported before November elections if the government holds its pace, and many of them might have earned tentative legal status had President Obama taken unilateral action to halt deportations.

Mr. Obama’s decision to put off any action until after midterm elections, which the White House leaked Saturday hours before he announced it himself in an interview with NBC, was mocked by Republicans and enraged immigrant rights groups, who said they felt betrayed after throwing their support to the president in the 2012 election.

The days when a boy could ride his bicycle to the park to take in a carefree summer day are gone with the wind. Society now insists on coddling the young, insisting on helmets and padding lest a raindrop fall and bruise a scalp or skull. A new Reason-Rupe poll, alas, finds that’s the way Americans want it, because they’re terrified that boys will be boys.

Among those surveyed, 83 percent demand laws against parents who won’t constantly hover over their 6-year-olds playing in a public space. Sixty-eight percent want the government to intervene lest a 9-year-old be seen by himself in a public park at high noon.

President Obama said that while the Islamic State can’t be defeated without boots on the ground, those boots will not be members of the American military.

Mr. Obama said in an interview that aired Sunday on NBC’s “Meet the Press” that he planned to address the nation Wednesday night to inform the American people on the nature of the threat from the Islamic State, also known as ISIS or ISIL, and his strategy for dealing with it.

The rising tensions with Russia over its aggression in Ukraine is creating national security concerns inside the Pentagon, where the military’s largest satellite program is reliant on a rocket engine produced by Moscow.

The Air Force said it has begun looking for alternatives to the RD-180 rocket engines for its Evolved Expendable Launch Vehicle program – the fourth largest line item in the U.S. defense budget – now that Russia has threatened to cut off the technology in its tit-for-tat struggle with the U.S.

Politics can be a grimy business. Beginning Monday, the grit and grime on the Continent will rise to new levels as the latest European Union rules take effect and all ships, cargo planes and trains will be subject to unprecedented scrutiny. Customs officials won’t be hunting for escaped Ebola patients or smuggled weapons of mass destruction. They’ll be looking for bootleg vacuum cleaners.

Sen. Ted Cruz, Texas Republican, told a crowd of 3,000 at a conservative summit in Dallas that Americans fighting with Islamic State militants should be exiled from the country saying, “we need to not let into this country any American who is fighting with ISIS.” 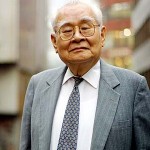 Louisiana Gov. Bobby Jindal’s lawsuit Wednesday challenging the federal Common Core education curriculum makes him the latest GOP presidential hopeful to use the dog days of August to recalibrate himself toward the conservative voters who will decide the 2016 Republican presidential nominee.